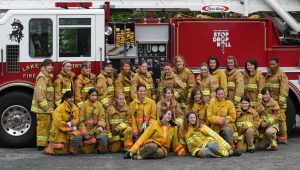 Based in Nova Scotia, Camp Courage is a not-for-profit organization dedicated to introducing young women to careers as first responders, primarily paramedics, police officers and firefighters. The founder/executive director of Camp Courage launched Camp Courage after noticing how women would often be discouraged from pursuing non-traditional careers by their families and the lack of first responder female role models.

“If you never see someone who looks like you do a particular job, you will not likely choose that [job] as a potential career,” said Andreá Speranza, the founder of Camp Courage. “Our mission is to empower young women and give them the confidence to achieve their goals, careers and dreams.”

Through The Prosperity Project Matching Initiative, Camp Courage was connected with three professionals who signed up as volunteers in January 2021, bringing their combined skills in strategy, human resources (HR) and finance. Camp Courage set a project goal with each volunteer. The three projects entailed a new five-year business plan, a sustainable funding strategy and a colouring book featuring stories of Canadian women in non-traditional roles to showcase role models! These projects led Camp Courage to decide to launch in other provinces through licensing agreements.

Camp Courage announced plans to launch nationally on March 8th, International Women’s Day. What happened next was unexpected: organizations in New Brunswick, Ontario, Saskatchewan and Alberta responded quickly, expressing their interest in learning more about partnering with Camp Courage to launch new camps. One of the volunteers notes that from the success of the announcement on International Women’s Day, Camp Courage will be able to achieve their goal of going national.

“It was overall [a] really good experience as I brought my skills to help Camp Courage achieve its goal and I was able to do something that will make a difference in the lives of young women,” says Ashley Fruck Siomos, one of the volunteers matched with Camp Courage.

The story doesn’t end here. Ashley’s volunteer placement was due to end March 1st, but she decided to continue her involvement. On March 31st, she hosted a virtual information session for Camp Courage, which included resources for emergency personnel and workers and featured Andreá Speranza, who shared her story. Through The Prosperity Project, Camp Courage has built “great, collaborative, productive relationships” with its three volunteers and is on its way to bringing the Camp Courage experience to young women across the country.